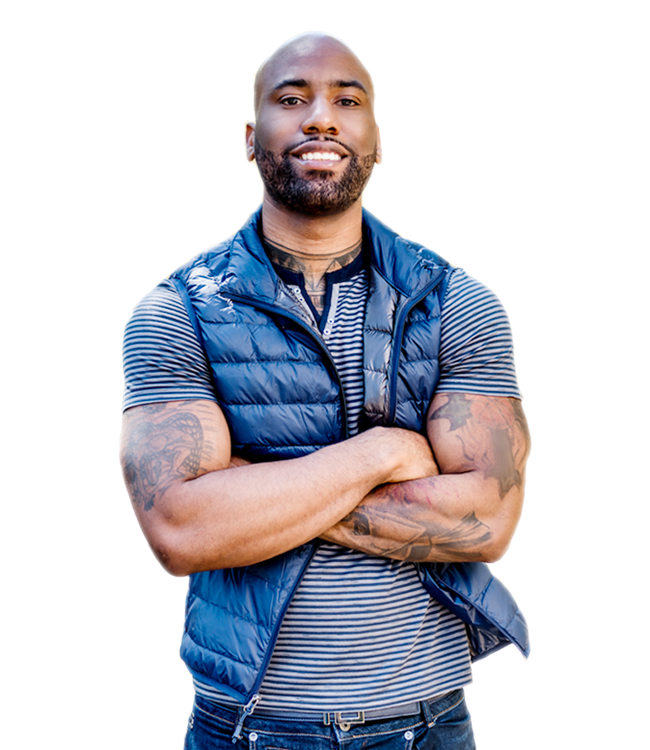 Who Is Gee Bryant?

Many people consider Gee to be a multi-dimensional guru, but few truly know him at his core. Gee has a passion for entrepreneurship, health, fitness, & mindfulness – accompanied by a burning desire to flourish in the business world. Gee relates on a soul level to people from all walks of life, because the experiences that were pre ordained for him to go through have led him to various encounters with all types of people.

Fed Up With the Rough Streets of His Hometown...

With nothing but his car and clothes in tow, Gee decided to embark on an 800-mile quest from Philadelphia, PA to begin a new life in Atlanta, GA. Shortly after unpacking his talents, the harsh reality and demands of adulthood quickly grounded him, and he found himself sleeping in his car. It was crunch time, and he was under intense pressure to make ends meet.

Gee had no choice but to rely on his athletic background and self-acquired knowledge, as he came up with the idea to offer personal fitness training. However, as good of an idea as it seemed, the money wasn’t rolling in as quickly as he expected. Once again, Gee was faced with the daunting task of building his reputation and business from the ground up. So, he held free fitness boot camp classes before generating any income just to generate leads and serve.

Through Consistency and Perseverance...

Gee was able to gain the trust and support of complete strangers to test his techniques, and their results were outstanding. His clients took to social media with their life changing testimonies, along with before and after pictures showing off their new bodies, and created a buzz for him as a young entrepreneur.

But Gee wanted more, and he knew that he could be of more service, so he looked to help as many people as he could. That desire led him to open his first gym in Atlanta, GA. , and with that he wanted to keep his core values at the heart of his business, – respect, loyalty, commitment, responsibility, and excellence – while creating a supportive and engaging atmosphere for all visitors.

That desire to serve helped Gee’s reputation, and people began to trust him even before meeting him. As the founder of X28, The Xtreme 28 Challenge, & X28 Nutrition Supplement line, Gee caters to people’s insatiable hunger for efficient results. Gee has been able to establish myself as an expert and authority in his lane, and has gained the support of various celebrity celebrities to endorse his programs.

Gee Has Positioned Himself as an Influencer...

Offering motivational, mindfulness, and business content relevant to all walks of life. Gee understand how society has failed people in the sense that antiquated processes just don’t fit the climate anymore. Utilizing independent studies to guide him, Gee built and sustained several successful businesses – including ‘The Gee Bryant Academy’, The World Renown brand ‘X28 Fitness & Nutrition’, and one of the country’s hottest fitness facilities – ‘The Loft Athletic Club’ as well as various other ventures.

Taking the lessons that helped shape his accomplishments, Gee has been been able to dominate the digital era as a rising icon, while spreading what he’s learned along the way. Bryant takes a raw, “give it to you straight,” kind of approach but it’s for him to empower you find your truth and walk in that light and give the world all you have to offer, while turning your ideas into income.

Through it all, Bryant leans on his standards of excellence, and the development of his mind, body, and spirit as as the catalyst of his ascension process in this lifetime, which has allowed him to align with himself in total truth, and build a multi-million dollar empire.

Enter your name and email below to receive my FREE 7-Figure Manifestation Secrets so you can turn your ideas into income.